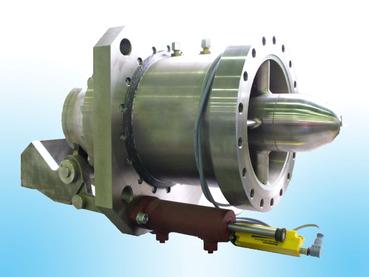 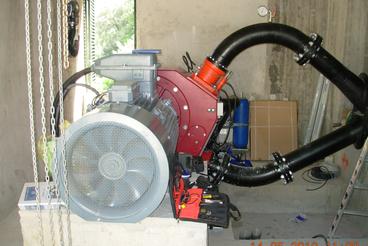 Nozzles direct forceful, high-speed streams of water against a rotary series of spoon-shaped buckets, also known as impulse blades, which are mounted around the circumferential rim of a drive wheel—also called a runner (see photo, 'Old Pelton wheel..'). As the water jet impinges upon the contoured bucket-blades, the direction of water velocity is changed to follow the contours of the bucket. Water impulse energy exerts torque on the bucket-and-wheel system, spinning the wheel; the water stream itself does a "u-turn" and exits at the outer sides of the bucket, decelerated to a low velocity. In the process, the water jet's momentum is transferred to the wheel and thence to a turbine. Thus, "impulse" energy does work on the turbine. For maximum power and efficiency, the wheel and turbine system is designed such that the water jet velocity is twice the velocity of the rotating buckets. A very small percentage of the water jet's original kinetic energy will remain in the water, which causes the bucket to be emptied at the same rate it is filled, (see conservation of mass) and thereby allows the high-pressure input flow to continue uninterrupted and without waste of energy. Typically two buckets are mounted side-by-side on the wheel, which permits splitting the water jet into two equal streams (see photo). This balances the side-load forces on the wheel and helps to ensure smooth, efficient transfer of momentum of the fluid jet of water to the turbine wheel.

Because water and most liquids are nearly incompressible, almost all of the available energy is extracted in the first stage of the hydraulic turbine. Therefore, Pelton wheels have only one turbine stage, unlike gas turbines that operate with compressible fluid.

The Pelton wheel is an impulse type water turbine. It was invented by Lester Allan Pelton in the 1870s. The Pelton wheel extracts energy from the impulse of moving water, as opposed to water's dead weight like the traditional overshot water wheel. Many variations of impulse turbines existed prior to Pelton's design, but they were less efficient than Pelton's design. Water leaving those wheels typically still had high speed, carrying away much of the dynamic energy brought to the wheels. Pelton's paddle geometry was designed so that when the rim ran at half the speed of the water jet, the water left the wheel with very little speed; thus his design extracted almost all of the water's impulse energy—which allowed for a very efficient turbine. 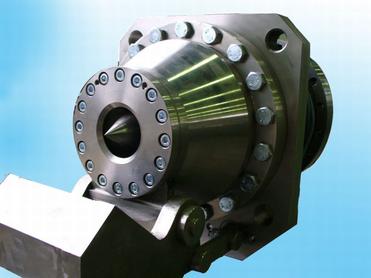 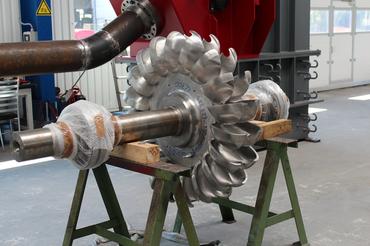